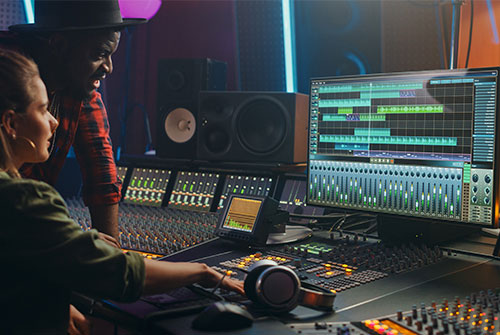 As an artist you may want to experiment with analogue versus digital sound. You will learn that with analogue you will require a full studio and the reel to reel known to give a warm inviting sound. Traditionally, analogue recording stood at the forefront of music production as artists and bands produced, mixed and mastered their singles and albums to press into vinyl LP, or cassettes tapes. Bands like Bob Marley and the Wailers, Led Zeppelin, Elle Fitzgerald, Pearl Jam to name a few took advantage of this format of recording creating their staple sound.

Recording using digital mediums today simply requires a computer, a good pair of studio monitors, a condenser microphone and a decent flat sounding environment to record mix and master. Digital distribution requires a high quality audio file to save an mp3 or wav format. Of course, you can add more bells and whistles to create a state of the art digital studio recording environment. The cool thing is, your studio can be scalable and suitable to your needs. We can help you be more efficient in the studio to produce material quicker from start to finish.

As a recording artist it is important to build your portfolio musically and represent the direction you want to go in. The multiple genres of music you want to explore including the message you want to express in your music are equally important. We can show you how to showcase your artistic style and personality through your music. You want your audience to recognize your sound immediately and get your music on podcasts, streaming platforms, radio, social media, and more. Users spend 25 hours a month listening to spotify and there are 286 million active members! As long as the quality of the production is good the better it will appeal to your fans. Music production has evolved so much now that you no longer need large studios but still artists do require a professional touch and expression based on their own unique sound to stand out.

Belinda Brady has stood out and studied engineering and production at the Harris Institute and produced her own music as well for over 15 years, where her songs have played worldwide on commercial radio. She learned from award winning producers Sly and Robbi, accomplished Canadian Derek Brin, whom she shared a Juno nomination, and Marvin Prince one of the producers of Canadian star, Snow who sold over 7 million copies; “7 inches of Snow” chart-topping hit, spending seven consecutive weeks at number one of the Billboard Hot 100.

Check out the latest blog...

And don't forget to Subscribe to her newsletter to get the latest news, freebies, and sneak music previews.